Afterimage (i.e. “the residual image”, that is the permanence on the iris of the colours that we have looked at for a long time) takes its cue from a personal story of the performer that is developed on three levels that interact with each other: the form of the movement, the atmosphere of the sound experience and the colour represented by the video animated projections.
The fluid lines of the dancer serenely blend or clash with the projections that make the physical place of the stage, rigid and limiting in its three white walls, malleable and ephemeral at the same time. The individual imagination of the spectator is stimulated in the search for signs of a story that is not explicitly told, but manifests itself “impressionistically” among red suns and purple cubes. 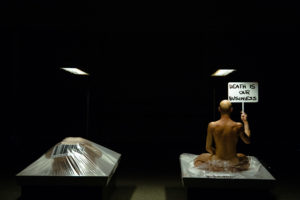 A dancer tries to free his body by carving with his gestures the thin plastic wrapping around him. We perceive the tremor of every muscle, the suffocated breath, the desire to survive. His shudder is a cry in a compressed movement, the last beautiful song of a dying swan. From the gasps of the plastic, we are overwhelmed by the dancer’s sighs: better heroes for a day or slaughter meat for life? Wrapped in the elegant and impalpable costume of Bruno Fatalot, a dancer moves solemnly on a barrel-pedestal, pulled by the painful and mysterious note of Beethoven’s Allegretto.

An im-mobile dance.
Im-mobility of the secular tree.
Soft movements, invisible to the naked eye.
The blood dripping in the veins, the heart beating.
A sensually funeral dance.
Obstinate Love.
A dance that celebrates an incessant, inexorable, ineluctable flow of the
Life.
Combination of solemnity and simplicity. Sometimes in a room from which we have no way of escaping, we try to build a cosy space around ourselves where only music plays. And this is what Cuban choreographer Norge Cedeño Raffo has sought to do with his MicroDance, which reminds us of that feeling of solitude and desire to escape experienced in recent times. What if we really could colonise a new planet? How would our sense of body, of movement, of space change? What would we take with us from our previous experiences on our own planet? Would we be more human or more artificial, more analogue or more digital, more emotional or more rational? Would we return to create a new ‘prehistory’ or build a new ‘future’?
What would be our relationship between a micro and a macro dimension in terms of different surfaces and new habitats?

The creation Kepler plays this almost science fiction and imaginary role of a micro-world within which the performer asks her/himself the question of inhabiting, colonising, surviving a new place through her/his dance. Near life experience is a quest into different states of the body, states which relate to intermediary sensations. We verge on these states when we near zones which hover on the edge of existence, to which we have access in moments of fainting, during a trance, in the instant of ecstasy, or orgasm. The notion of both rapture and ravishment, of both intensely luminous sensation and the carrying off of the individual, comes close to this experience. The subject is elsewhere, carried off from her/himself, s/he is ravished. 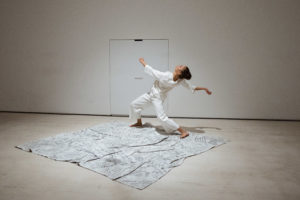 This short piece explores the world of thoughts. Memories, expectations, frustration, excitement, doubts… Through audio recordings of her own voice, the dancer is led on a journey into her own conflicted mind. The body responds to the different emotions, following the inner chatter of her incessant stream of thoughts, led into an unstoppable dance. Platform02 challenges the dancer to adapt his movement to a space that is constantly being reduced.
Some questions, which are always more relevant, guide this piece. How much room do we give ourselves and how much do we need? What are the consequences of less and less room for everyone? How much space do we want to leave for other species and nature? 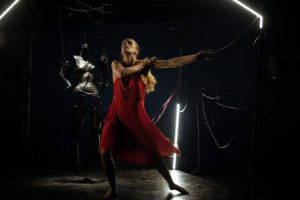 “[…] this experience of the scapegoat is everywhere in society, except in each of us.” — René Girard

Rite and sacrifice are the key to interpreting this work in an installation frame, where movement and staticity are opposed like the old to the new, like the sacrificed to the sacrificer. But what if the latter were the same person? A dance that becomes a game of optical illusion. The dancer projects on a film her doubled moving image. It is as if she were inside a glass bell, which distorts her vision of the world and keeps her from connecting with the people around her. The spectator, disorientated at first, can choose whether to enter her world or remain distant and alien.

The Bell Jar invites the audience to observe a dancer through an optical lighting film. This glass-like structure creates the optical illusion of a double image and a sense of disorientation to the observer. Behind this frame, watching the simple actions of a person becomes a unique visual experience. I have always been interested how watching a performer can be an exercise in empathy. The simple fact of observing another human being can challenge existing habits of thought and open up new perspectives. Particularly in times when, too often, conformism and fear seem to prevail, understanding the actions of others through empathy is crucial to our co-existence. THE WOUND / ARCHIVE OF WESTERN IMAGES

It was born in me the desire to reflect and work on the idea of an archive, to put together an enormous quantity of images. Images of Western culture. I felt that that “tension there to hold together” would be my detonator. […]

However, it seems to me to glimpse two common elements that echo underground rivers that cross the great continent of Western art: I am referring to the veil concept and the figure of the woman. […] From a historical perspective, it’s precisely after the Second World War that the veil, that is the support of the image, begins to “speak”, to show itself as such. […] Scholars like Stoichita have not hesitated to compare Lucio Fontana’s cuts to Christ’s wounds side in the depictions of the Crucifixions, Passions, Pity, etc. So the veil leads us, in this very fast meta-medial reflection, to the concept of wound.

[…] The nerve centre is in my opinion in Hans Belting’s words when he announces that: “The history of art as a discipline isn’t dead yet, its methods are obsolete”, referring to Yves Klein’s operation of using the flamethrower to literally “burn the image” making the productive act of the image (the burning) a performative act. A creative action.

Following this perspective, it’s interesting for me to grasp a milestone of visual and performing art, that is, of representation: that of the wound. My project is therefore a question for the viewer: what is the wound of Western culture? Turn the Tide on Plastic. This is the name of the racing boat that during the Volvo Ocean Race collected important data on the pollution of the ocean by microplastics, discovering that they are much more widespread than people think. A recent study by the University of Newcastle has calculated for the first time that the amount of plastic we ingest is equal to one credit card per week. There are seven plastic islands discovered so far in the world. Fluctuating landfills, accumulations of all shapes and colours. The emergency is much more serious than is perceived by the masses. Hence the idea of transforming chaos into an untouched bookshop, with neat rows of bottles, the aseptic white, suited to that state of trance in which we have immersed ourselves. An ornament instead of horror. But we must collect ourselves. The reversal of the trend is proving indispensable.