In Brussels, MicroDances are rooted in an urban landscape that beats at two different rhythms.

Tachycardique in Tour & Taxis, a trade centre and former industrial freight station located along the canal.
Biorythmique in the Coulée verte, a green trail grounded in the living beings and the knowledge buried beneath the metropolis.

For two decades, the land, which was abandoned at the end of the twentieth century, has been fuelling the imaginations of town planners, artists, architects, circus performers, promoters, gardeners, and developers.
A massive urban project will be completed in 2022. The land has the appearance of wrinkled skin. The soil is worn out. Neighbours, runners, children, cyclists, and pets and their owners are crossing public, semi-public, private, common, and liminal zones.

Who are we? A melting pot of Brussels citizens experimenting with body-landscape interactions. Among us, eight dancers were chosen by Les Halles for their multidisciplinary and outdoor skills. After participating in a European workshop, they will perform six MicroDances shaped by Italian and Greek choreographers during the Covid crisis.

Each MicroDance is a microworld, a dialogue with the open space. A sort of acupuncture in which each point calls for a shared story told by watchmen who weave connections between the spirits of the location, passers-by, and the present moment.

With their disquieting beauty, the MicroDances‘ journeys from the underground to the surface are an essential part of the vital art of healing our connections to places.

Let’s explore what’s under our feet, under Pannenhuis, Pan’s home… There is no distinction between the living and the dead in the proto city: two spirits open the route.

Under the next bridge, facing a street workout park, one singer and one dancer embody the pain of performing: should you prioritise art before life or put art at the service of life? 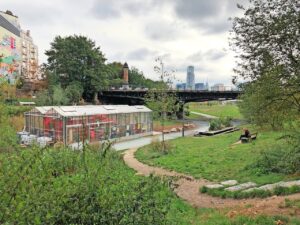 At Parckfarm greenhouse, we grow the land, the connections, and the creativity to restore the resources of the uprooted metropolis. There, a woman is looking for a place to call home. But she is losing herself when her head invades her body. 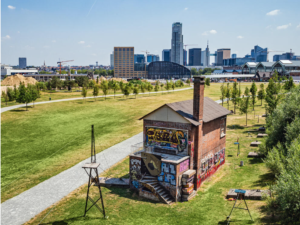 After the last bridge, under the skyline of the towering skyscrapers of Brussels’ little Manhattan, a proto-architect dances with wood, in search of Human scale, like a Vitruvian man. 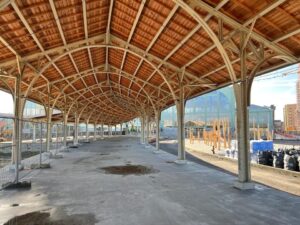 At the entrance of a tunnel, along a curved timeline, an extraordinary creature recreates the first motion: drawing a line, locating their skeleton, their hand, and their eye before engaging with the world. 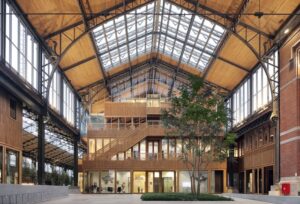 At the maritime station, a temple of commercial reconversion and food concepts,
two characters emerge from an above-ground café to exorcise plastic, a polluter of bodies that have become objects.

At the exit, let’s meditate in front of the scraps of land that were stripped from the ground before development began. The majesty of simple things.